BuzzFeed in the Classroom Review

Earlier this semester, I wrote about a new opportunity and assignment for students in my Writing Across Platforms class: writing BuzzFeed community articles.

That post got a ton of shares and feedback. So I want to offer a follow up and reflection of how the project went. If you haven’t yet, I encourage you to first get some background about the assignment via my post “What’s Changing? My Writing Across Platforms students will write for BuzzFeed and More in Spring 2016. Oh, And here’s the syllabus!“

I was super impressed by the variety and creativity of the posts.  The topic was ‘spring break’ and the students came up with everything from “17 Outdoor Adventures You Need To Try This Spring Break” to “10 Things To Do When You’re A Broke College Student On Spring Break: As Told By Animals” to “Ten Locations You Dream Of Exploring Over Spring Break.”

The biggest success story, in terms of views and shares, came from Abby Buchanan’s “14 Things You Do When You’re Stuck In A Small Town For Spring Break.”  The post was featured on the Buzzfeed.com/Community page within 24 hours of being posted. 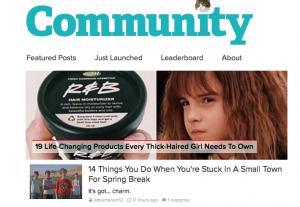 Due to its success, it then was put on BuzzFeed’s main site. 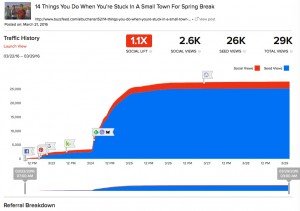 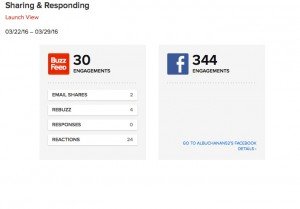 For a little while, the post was also the first result in Google search when searching “spring break small town.” Congrats to Abby!

I spent some time considering why the majority of students struggled to reach 1,000 views.  Here are some thoughts:

Students who had success:

In reflection, there are some pitfalls in how I executed this assignment and things I plan to improve for next year.

The biggest pitfall was the way views were incentivized.  Once students reached the 1,000 mark, they tended to give up – even if it was in just a few short days. For example, one student reached 1,000 in 24 hours and gave up (see below). After that, she stopped promoting it and only gained another 100+ views. The assignment doesn’t reward students past 1,000 unless they get to 10,000 views – which many likely see as impossible and thus they aren’t motivated to do so. Furthermore, I only gave 1 bonus point her 10,000 views, further reducing the benefit to cost. 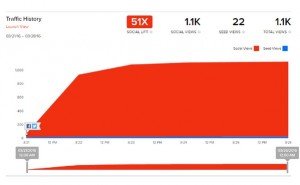 So what adjustments will I make?

In sum, even though students were as successful on the whole as I’d have liked in terms of views, the assignment was a great success. The students had to think outside of simply turning in an assignment to me. They had to measure themselves against their own ability to plan a piece of hypertargeted content with the audience and promotion in mind, like they will do outside of the university. They learned from their successes and failures. I had a lot of conversations with a lot of students worried about not succeeding. I informed them that the purpose was to learn by doing – to adjust, adapt, and improve. And to me, that’s a big win.  I think much more was learned in this assignment than in the assignment I replaced it with.

As noted, we did have a breakout success beyond my expectations with a student landing her post on the main Buzzfeed.com site!

I plan to continue with this assignment next year when It each this class with the above modifications.

If you run this assignment in your class, I’d love to hear how it goes!

3 thoughts on “What Happens When Students Write For BuzzFeed For A Class Project?”