This year, the social media committee of the Public Relations Division of AEJMC wanted to make some changes in how we conduct our interviews with senior faculty and practitioners.

For several years, interviews have been published on the PRD blog in written format. We thought it would be fun to put a fresh spin on things.

So, we came up with the PRD Ask Me Anything (AMA) series with Senior Faculty and Practitioners. Based on the popular AMA format on Reddit, we solicited questions from PRD members to then pose to the interviewee during the live interview. The interviews are hosted live on the AEJMC PRD Facebook page at a publicized time.

I recently had the honor of hosting our first ever PRD AMA with  Dr. Tiffany Gallicano, past head of the PRD and faculty member at UNC Charlotte. 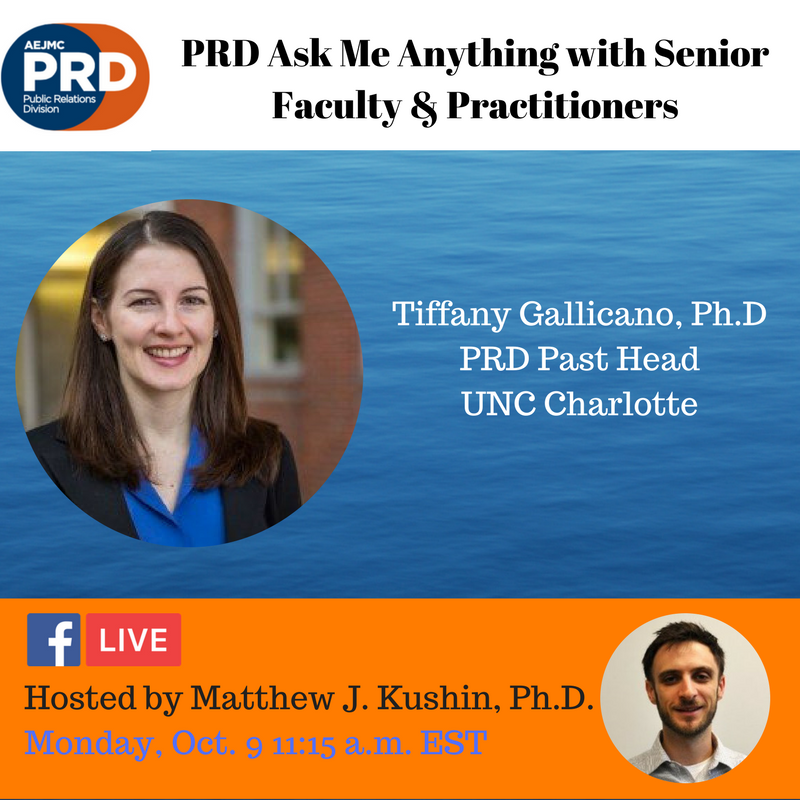 If you missed it, the interview is full of wonderful advice from Dr. Gallicano on how balancing work and family life, preparing for tenure, keeping one’s research current in an ever changing media landscape, and more. I was particularly inspired by her advice to focus on teaching preparation as a new faculty member, which to me demonstrated a thorough and passionate commitment to pedagogy and to her students.  I also was very impressed with how Tiffany manages to find a unique work/life balance as well as how she harnesses her energy to maximize her productivity.

You can watch the full interview below. If the embedded player does not load, you can find the PRD AMA interview with Dr. Gallicano here.


Having never conducted a Facebook Live interview and having only gone live on Facebook one time before, I had a lot to learn. Here are 4 things I picked up in preparing for my interview:

This first thing I learned is really a reminder/advice to myself.

I’ll admit, I was rather nervous to conduct the interview. I’ve always seen myself as a ‘behind the scenes’ kind of person. That is, I like promoting ideas and people. But,   I’ve always been a bit camera shy.

Thus, I have been reticent about using Snapchat and about entering the livestreaming era of social media. In this way, I have limited my own growth in the social space. Said another way, as the social media landscape and culture has changed towards the self-facing camera, I have studied it, taught it, and kept up to date with it. But, I haven’t much participated in it.

I wanted to do this Facebook Live show because I wanted to give myself a reason to take the plunge and get in front of the camera.

I’m glad I did. I found the experience  nerve racking but exhilarating.  As soon as I got off the call, I started brainstorming ideas for my own Facebook Live show.  Hopefully, I’ll find the time to put it together and make it a reality. No matter what, I’m going to force myself to get in front of the camera more often.

2. Get on the call with your interviewee 30 minutes in advance.

Dr. Gallicano was kind enough to get on the call with me 30 minutes in advance to prepare for the call as well as to test and make sure everything was working correctly. We noticed that the sound was lagging. So, we tried to close some programs on our computers in the hopes that it would speed things up. When that didn’t work, we both restarted our computers and got back on the call. This took a bit of time and, had we not had the 30 minutes, we would have had to start the call late.

2. Prepare talking points. And print them.


I wrote out an outline of the call, which I shared with Dr. Gallicano.

In addition, I had a basic script of what I wanted to say and highlighted specific sentences I wanted to make sure I said exactly right as well as the questions that I had received from PRD members.

I had the script up on my computer. But, I also printed it and posted it on the cork board directly behind my computer just in case. I didn’t want to have too many windows open on my computer and be navigating around while on the call.  In the interview, there was too much going on on my screen to pop back and forth between the BeLive software and my notes. Thus, I ended up relying on the version I had printed. If you look closely to the interview, you can probably see my eyes looking slightly above my camera when I was looking at the script directly above my computer.

4. Be prepared. Then, be prepared for little things to go wrong anyways. AKA, expect the unexpected.

We used BeLive to conduct the interview so that the split screen interview could be done via desktop computers.

I spent a good amount of time playing with BeLive on my own, watching interviews others had conducted on Facebook Live, and learning everything I could about live streaming to Facebook. I even did a brief promotional Facebook Live video a few days ahead of time so that I could have experience going live with BeLive on Facebook Live before conducting the interview. But, when we did the actual interview, something went wrong and I didn’t notice it. For some reason, the first few seconds of the interview worked and viewers could see and hear us. Then, immediately following, the screen was black and we could not be heard by the audience on the PRD Facebook page.

Unfortunately, I had not loaded the PRD Facebook page so that i could see the Facebook Live interview from the viewer’s perspective. Thus, I was not aware that this was happening. I had been concerned about feedback from the live interview playing on my computer while I was trying to conduct the interview. Because BeLive said that we were live and I could see we had a few viewers, I assumed everything was working just great. It wasn’t until a viewer commented that she could not see or hear us, that I realized what had happened. I had to close the Facebook Live broadcast and restart it. Fortunately, everything worked during the second time around. But, during the time that the audience couldn’t see us, Dr. Gallicano had given a wonderful answer to the first question I had posed to her during the interview. And, no one got a chance to hear it. Fortunately, Dr. Gallicano was very gracious and repeated her answer to the question during the second broadcast.

Next time, I’ll be sure to load up the live interview to make sure it is working, mute it, and keep an eye on it. 🙂

In summary, I had a lot of fun conducting this interview with Dr. Gallicano. Dr. Gallicano is one of the most generous, gracious, knowledgeable and passionate educator/scholars I have had the opportunity to speak with. I learned a ton from her. If you haven’t yet checked out the PRD AMA with Senior Faculty & Practitioner series, you can find the other interview that has been hosted thus far. It is with Dr. Denise Bortree, PRD past head and associate professor at Penn State, by going to the PRD Facebook page or by clicking here.