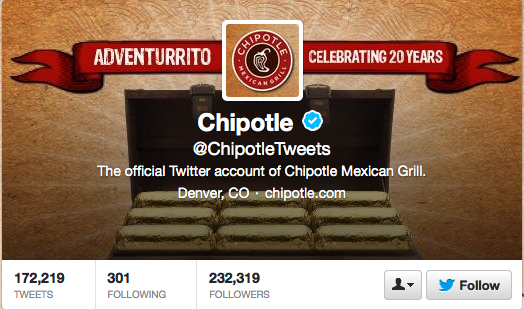 What were those Chipotle Tweets all about? – That’s the question some are asking after a series of bizarre Tweets by the restaurant chain. In a boldly titled article, “How to alienate your Twitter followers: Chipotle staged hack falls flat,” Hayley Tsukayama indicates that Chipotle was trying to ride the tide of other brands that found surprising success (i.e., increases in followers – if #s = success on social media) after being hacked. According to the article, a spokesperson for Chipotle claimed the Tweets were related to a treasure hunt promo the company was working on. To see some of the Tweets, check out this post by BuzzFeed jokingly titled “Either Chipotle doesn’t know how to use Twitter, or they know exactly how to use Twitter” in reference to the 3700 RTs the brand received.

What was the true motive for the Tweets? We’ll never know. The larger question is, was it good for Chipotle? I’m not as critical of Chipotle here as others may be. Clearly, awareness of Chipotle’s treasure hunt promo is lacking and cross-media tie in was ineffective. The “stunt,” executed differently, could have worked very well as part of the promo. To me, the question here is one of social media identity.

What seems to bother people here is that Chipotle acted in a way inconsistent with its brand identity, specifically its social media identity. Chiptole comes across as lighthearted and a little strange (there are talking pigs and chickens on their website) – but it was acting a bit erratic on Twitter.

Let’s keep in mind that those following your brand on Twitter are not going to be aware of what you’re doing in other spaces unless you clearly tell them. Seeing as that can be a difficult thing to do (our attention span is short and we’re not always listening when the Tweets go out) a separate Twitter account for the promo may have been another option. Though this option carries with it some serious limitations, it presents a great opportunity to explore how social media identity is tied up into this.

Remember, your identity is wrapped up in your social profile. And your identity is what others think you are. Your Twitter followers expect you to behave in a way that is consistent with how they perceive your Twitter identity. That is why building that identity – playful, serious, etc., is at the core of the success of a social account. It is easier to create a separate identity (separate Twitter account) that can behave differently than it is to acclimate existing Twitter acquaintances to an aberration or long-term change in personality.  Consider your interactions with others every day. If your good friend who was mild-mannered and easy-going suddenly became the life of the party, you’d wonder if something was wrong. You might say, “I like the old Sally.” It is not to say you don’t like having a friend who is the life of the party. But that role is something you associate with a different friend (personality). It is always much easier to introduce people to someone new than a new you. In this instance, Chipotle could have remained consistent with their existing account.

Of course, why have to try and bring followers to a new account when you’ve done the hard work of building your existing followers? And that is a serious limitation to this alternative and a very good reason why you may not want to build a separate account in a situation like this.

Separate account or no, cryptic and erratic may not be the best way to go on social. At any rate, it gives us a great opportunity to think about social media, identity, audience expectations, and that ever-growing need to stand out in our attention economy.

Experimentation and bravery are needed. And I applaud Chipotle for that. You can’t know until you try. Is the whole thing quite strange? Yes. Is it going to have any real negative impact on the brand? I doubt it. (next week I’ll have a post about another brand who did a great job of doing something different and having great success!)

What do you think about the Chipotle Twitter situation? Is it an inconsistent social media identity that has people talking about this , or is it something else?